As one of the most influential bands of all time – The Beach Boys have proven their longevity on the music scene, with their unforgettable releases during the sixties all the way up til now. Here's your chance to catch some of their most famous hits live in concert this Summer season! They will be joined by Utah Symphony at this unique performance at Snow Park Outdoor Amphitheater on Saturday 7th August 2021! Don't wait too long to secure your tickets for The Beach Boys! 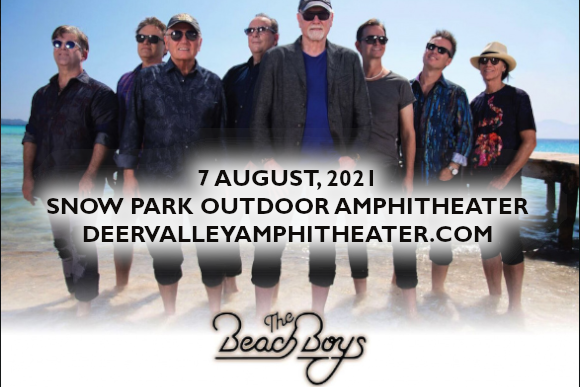 Hailing from California, The Beach Boys have never failed to bring their beach inspired sounds to the world. Their legendary career has spanned over the last almost six decades and they have inspired the masses with their incredible single and album releases throughout the years. With their work crafting a whole new era to the music scene most notably during the 1960's with their unforgettable songs such as "Good Vibrations" which still remains to be ever popular til this day.

The Beach Boys line-up has changed over the years, due to tragic incidences but the music continued and now members include; Brian Wilson, Mike Love, Al Jardine and Bruce Johnston. Together they continue to take their legacy to venues all around the world and perform unforgettable concerts with their biggest hits from their long standing collection. The Beach Boys are much loved and respected in all corners of the earth for their 'surf rock and roll' and of course their distinctive harmonies and innovative approach to songwriting.

The band have reflected the feel good southern Californian way of life, with their lyrics highlighting on surfing, romance and overall good times. Their career has stayed at the top of the game and really has stood the test of time and now they are known to be one of the most consistently successful groups to walk the earth. With over one hundred million albums sold across the globe, The Beach Boys are heavily listed in several lists of the greatest artists of all time.

If you love The Beach Boys and really who doesn't, then don't miss out on this once in a lifetime opportunity to relive the 60's as they take to the road to celebrate another groundbreaking tour! Tickets are on sale now, however they won't stay around for long – book yours right here above today!